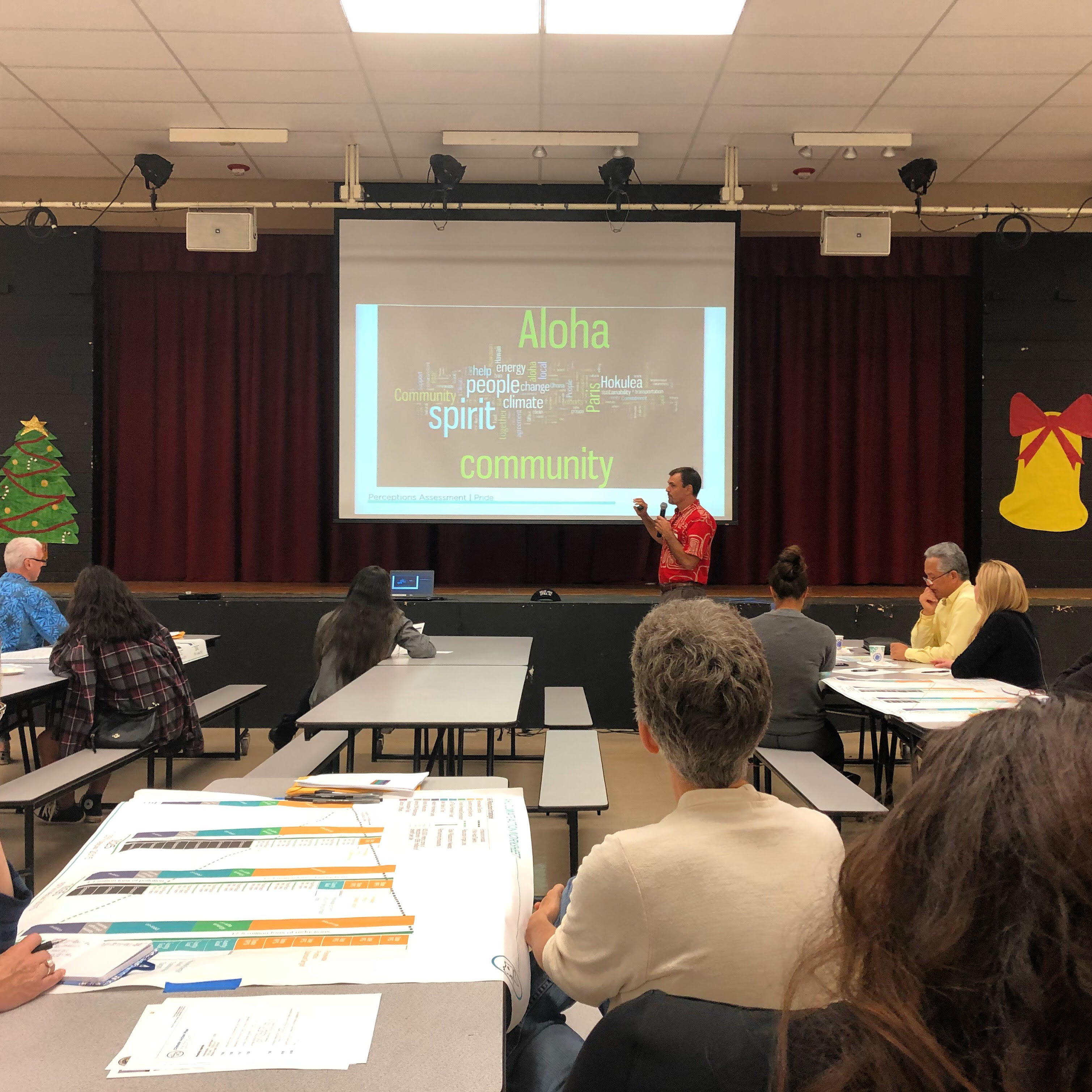 The last seven months on Oahu have been both magical and informative. As we prepare to leave (for now), I’m ending the adventure the way it began, by spending time with the City and County of Honolulu’s Office of Climate Change, Sustainability and Resilience. Director, Josh Stanbro, proudly indicates that his office is the only municipal office in the country with “climate change” in the name, which tells you how seriously Oahu is taking its concerns about the future. In fact, the Office of Resilience (its shorthand name), has been hosting Climate Action Planning Community Meetings all over the island for the past two months. After attending one of these meetings in Mililani (Central Oahu) on December 12th, I wanted to share a few things we could all learn from this team’s unique approach to incorporating community engagement into climate change planning.

As I arrived at the Climate Action Planning Community Meeting at a school in Mililani, I was impressed with the good turnout assembling in the cafeteria.  I asked staff members about participation at previous meetings and they said they’ve had groups of over 100. If you do community engagement, you know it’s not easy to get that many people to show up!

It’s hard to say exactly what is working well to get community members engaged. In my experience, residents of Oahu do seem highly interested in climate and environmental issues, particularly after a rough summer of hurricane scares. But I think the turnout can be largely attributed to a combination of partnering with district councilmembers and extensive promotion over Facebook (e.g. this welcoming post for an upcoming meeting on January 16th).

Josh Stanbro could teach a masters class in communicating climate messages to community members. He opened the event with an overview that was neither extremely wonky nor did it assume that the community members wouldn’t understand the complexities and urgency of climate change.

Without overindulging in fear, he emphasized the thin 10-mile layer of atmosphere that protects life as we know it, and reminded folks that humans are dumping 110 tons of carbon into this layer every 24 hours. Using the analogy of being trapped in a heated car, he quickly explained how the cascading impacts of global warming were presenting themselves on Oahu and suggested we were running out of time to “break the windows.” Now that he got the audience’s attention, he shared larger policy goals, such as the State of Hawaii’s goal of reaching zero emissions by 2045, which help set the stage for his office’s planning efforts. Josh explained that his office hadn’t been waiting for a formal plan to begin reducing emissions, which was met with approving nods from the crowd that seemed very ready to do their part to help.

You can view the messages and graphics they use in their community presentations by clicking here.

I’ve seen plenty of local government staffers do just enough community engagement to check a box. In Mililani, every staff member of the Office of Resilience was there after normal work hours assisting with the event and going out of their way to interact with attendees. Josh made sure the community knew they were a valued and critical part of the planning process. It was clear he really believes that Oahu’s aloha spirit and community cohesion are among its most important assets in combating climate change.

After the overview, Josh handed the mic to Energy Program Manager, Robert “Rocky” Mould, who facilitated an interactive exercise he designed to get community members to spend time considering options from the vantage point of decision makers. Community members sat in groups at tables that featured a “game board” that allowed them to pick the strategies they wanted to see the City and County of Honolulu prioritize to meet the 2025, 2035 and 2045 emission reduction targets of its Climate Action Plan. What a clever way to build awareness, spur dialogue, and collect input!

The results of all this community engagement will inform the development of Honolulu’s Climate Action Plan, expected to be complete in 2019, which is a key piece of Honolulu’s broader Resilience Strategy. Even the Resilience Strategy is based heavily on community input. Earlier this year, Josh and his team successfully solicited 2,300 survey responses that were used to establish “4 Discovery Areas” (see image below). This unique set of guiding principles shows how committed the Office of Resilience is to staying focused on what is most important to its community.

As Prosper Sustainably continues to hit the streets in various communities, our goal is to continue sharing strategies, ideas and insights with those of you working to help hometowns prosper, sustainably. We invite you to join us us on Facebook, Youtube, and Linkedin. If you know colleagues that would appreciate a dose of inspiration, we would appreciate if you would share this with them!

I’m Angie. I’m a mom and sustainability consultant. I love communities and have been serving them for nearly 20 years, implementing solutions that protect the places that people call home. My family and I are now exploring communities around the world, meeting hometown heroes and thought leaders, and we are convinced. Solutions exist. In data, in technology, in policy, in plans, in projects, and in programs. They are a part of the tale future generations will tell about how we chose a thriving future. Let’s find them together. Let’s move faster and smarter. Let’s prosper, sustainably.